General information regarding the second,
And final installment of this Single Play expansion for Tron2.0
Post Reply
14 posts • Page 1 of 1

Q: What is User Error?

A: User Error is a Single Player expansion for the PC version of TRON 2.0 in the form of a mod, that was originally released seven years ago. It featured 5 levels created by Meatsack. Meatsack teamed up with LDSO to create 11 additional levels for the expansion, bringing the total to 16 (including cutscenes). The most recent version of User Error has released the original 5 and additional 11 levels as two separate parts, now known as User Error 1 and User Error 2.

The story of User Error is about a character named Jeremy Powers who works at fCon, shortly after their takeover of ENCOM. Jeremy is having financial troubles, and decides to use his position at fCon to do some espionage in order to make enough money to pay off his debts. A former Russian agent named Karl offers to reward him handsomely if he will risk entering the computer by being digitized, and retrieve the fragments of a top secret file. Gathering all the fragments proves much more difficult than Jeremy originally thought, as his continuing adventures in the new additional levels demonstrates.

A: Although the previous version with combined parts was released as "RC2", it is now considered v1.0.

A: User Error 1 and 2 are self-installing now. All you have to do is run the self-extracting program you downloaded to extract the installers to your desktop, run each one, and follow the on-screen instructions. The installation process has been made as automated and painless as possible. REZ Handler is no longer necessary to install these. User Error should work on any version of Windows going back to 98, but was tested on XP/Vista/7/8 only.

It is recommended to install and play through User Error 1 first, then install User Error 2. As you install each part, it automatically becomes active the next time you run Tron 2.0. So after finishing Part 1, if you install Part 2 and start a new Single Player mission, you'll be playing Part 2 instead.

To confirm a part of User Error is installed and active, when you start a new Single Player game you'll get a new User Error mission. As a bonus, if you installed the Killer App Mod before User Error, you'll see a new animation on the Main Menu that will instantly let you know User Error is working.

Remember that while the mod is enabled, you cannot play Multiplayer online or load any older Single Player saved games. You must disable the mod again. You can disable the mod by clicking the "Custom" button in the TRON 2.0 game launcher and removing the X from the checkbox.

You cannot load any saved games from Part 1 when playing Part 2. But at the start of Part 2 you will be given everything you need (weapons, subroutines, etc.) so you don't have to start over from scratch.
Last edited by TronFAQ on Fri Mar 30, 2012 7:31 pm, edited 8 times in total.
LDSO Facebook | Twitter | YouTube | DeviantArt Pages

I haven't seen this question addressed anywhere, so I ask here.
Should I be disabling Killer App Mod before playing User Error? Just starting User Error tonite, and have not disabled Killer App.
end of line
Top

Yes, you will. User Error is a mod, and KA is a mod. In the KA startup, you have the option to enable a different mod. Check the box next to User Error.

When you run the Tron 2.0 launcher (not the Mod Manager), there's a button named Custom at the bottom. Click it. Look for the X beside the word Retail and remove it. If User Error was installed correctly, you should see UserError and can place an X in the box beside it. Click OK.

Some elements of the KA Mod will still be in effect, due to the nature of the way it was designed. Unchecking the word Retail doesn't completely eliminate its influence. (The only way to completely disable KA is to use the Mod Manager.)

But User Error will now be active and you can play it. As long as User Error is active, you cannot go online in Multiplayer to play. You need to disable it and enable KA again by putting the X back beside the word Retail.

An updated version of User Error is forthcoming that will work a little better together with KA in widescreen, and it will have some bug fixes. But nothing that will make you want to rush out and download the updated version once it becomes available. There won't be any new levels or anything like that.
LDSO Facebook | Twitter | YouTube | DeviantArt Pages

Wait, I'm a little confused now. From what deeahchur said, I took it to mean I needed to go into the KA Mod Manager and disable KA there. From what tronfaq said, I take it to mean that's not needed, just enabling User Error under the Custom menu is enough? Which is most accurate? Doing the latter would keep my resolution at 1280x1024, and the former would drop it 1024x768 I'm assuming ..?? >> ..
Top

Go with what TronFAQ says. He knows more about how KA operates.

User Error made it as a front page headline at ModDB. It's the rotating flash banner at the top. Woohoo! I took a screenshot of it. 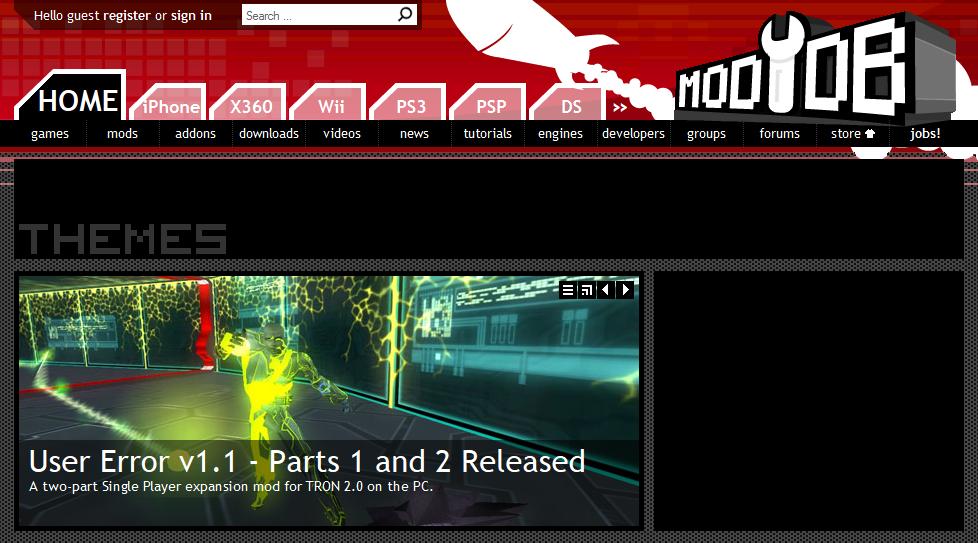 As mentioned elsewhere on the forum, I recently installed Tron 2.0 on Windows 8. At first, I was having some difficulty with it. It wasn't working quite right, or so I thought. Turns out, it both is and isn't Windows 8's fault.

What was happening, was that if I tried to activate UE1 or UE2, they didn't work. Also, the game would crash on exit almost every time. While it started and ran fine, the constant crashes on exit were annoying (if harmless). Then it struck me.

Kain-Xavier let me know about a problem with the User Error 1 and 2 installers, not too long ago. Sure enough, I'd encountered the same problem he'd had earlier.

It turns out, that Microsoft has slowly been removing .DLL files from recent versions of Windows, that they consider old and unneeded. A section in the installation process for the UE1 and UE2 installers, relies on one of these .DLL files that have now become absent from Windows. Windows 8 is definitely missing the required file. Hence, my difficulty.

Without the .DLL file, the UE1 and UE2 .REZ files end up being empty after installation. UE1 and UE2 don't work. It's also why Tron 2.0 was crashing all the time on exit. The game didn't like the empty .REZ files. (I'm surprised the game even started.)

Sure enough, as soon as I copied the required .DLL to the appropriate place in my Windows 8 installation, the UE installers worked properly.

So, I'm going to have to do a minor update to UE1 and UE2 to cure this problem. Before lots of people try installing the mods in Windows 8 and run into the same issue. I'll try to get it done by the time Windows 8 is released to the public.
LDSO Facebook | Twitter | YouTube | DeviantArt Pages

TronFAQ, you put so much work into helping this game stay alive! You deserve a medal, and a hefty paycheck IMHO! Even though I am unable to provide you with the paycheck, you always receive my appreciation for your work!

New v1.1a of User Error Parts 1 and 2 has been released. While the main reason for the update was to fix the problem with the installers on Windows 8 (and sometimes even on prior versions of Windows), there are some additional changes.

The most significant one is the fact that the Gold colored ICPs and the various color Kernels now have energy shields and discs that match their own color. Instead of the shields and discs always being red.
LDSO Facebook | Twitter | YouTube | DeviantArt Pages

"Appropriation is the highest form of appreciation."
Top
Post Reply
14 posts • Page 1 of 1